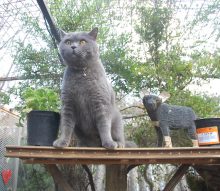 We are all very sad at the Cat Hotel, after Sylvester was collected for his trip to Portugal. He has been with us for almost two months, and we have grown very fond of his friendly and cuddly character. This is typical of the breed, which generally have a calm temperament. According to Wikipedia, the British Shorthair is the pedigreed version of the traditional British domestic cat, with a distinctively chunky body, dense coat (read “cuddly”) and broad face.
British Blue’s remain one of the most popular pedigreed breeds in the UK, but we don’t see them at the Cat Hotel too often. They are bred in South Africa, but are not that easy to find. We may just have to buy a kitten for ourselves, and we have heard that Feline Magic SA do breed them. They actually have a page dedicated to the British Sho Sylvester was born in Hungary, and came to South Africa when his parents were posted here on a temporary contract. He was here for 3 or 4 years, and will now be settling in Portugal. A real jet-setter. The photo is of Sylvester in the Cat Hotel’s play area, on one of the platforms. It was difficult to photograph him, because he would always run and brush up against you. The platform made it a bit easier.