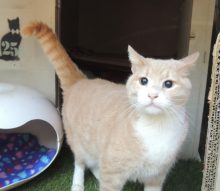 The Urban Dictionary’s top definition for “snodgrass” is the term used for the hair on a man’s neck when it gets out of control…We know Snodgrass as a loveable, blind, male domestic short hair kitty that visits us quite often at The Cat Hotel.

Snodgrass was born blind and seems to have been abandoned by his mother…or maybe he just lost his way. He was found on a usually busy road on Good Friday by his new owner. He noticed what looked like a brown paper bag on the road and reversed to investigate. What he found was a 400 gram kitten, eyes tightly shut, hanging on to life. Fortunately, the road was not that busy on a public holiday, otherwise it may have ended differently. The little guy was also lucky that he was saved by a pediatrician, who was able to syringe feed him and nurse him back to health, and who adopted him despite being blind. He is now 5 years old.

We are happy that his owner decided to use the Cat Hotel to look after Snodgrass when he travels, and we have grown very fond of him. When we sit with him, he will come out of his villa for cuddles and he is not afraid to wonder around, although it helps when you pat on nearby surfaces so he knows where to step. He has a great nature, and is very loving. We always give him the same villa, and he has become familiar with the layout, so that he can now move around remarkably well (as you can see in the pictures below). Its one of our garden villas, where he has a large patio to sit in the sun, a small garden and a tree with platforms to climb in. He can even climb onto the platforms, seemingly to “look around”. We noticed when the flash went off, that he seemed to raise his head, so perhaps he does see the faintest  of light. He stays at the Cat Hotel when his owner travels to conferences, the most recent being in Durban, when he stayed for a few days. He will be back in two weeks when there is a conference in Dublin, and also visits when the doc travels into Africa. The last trip was up to Botswana. He may not be as famous as some other blind kitties, such as Oskar from the US , who has amassed a sizeable internet following through his YouTube videos (see references), but he is a star in our world.

Oskar on You Tube