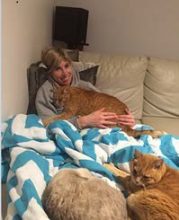 The Cat Hotel boarded 3 cats for 18 months prior to being relocated to Australia. They are now safely with their mom, who wrote the following article for the Lort Smith Adoption Centre’s newsletter (The Lort Report) in Melbourne, where she is a volunteer.

I left behind a big piece of my heart in South Africa when my husband and I said goodbye to our three cats as we set off to Melbourne nearly two years ago. Our new house was not the same without them and we knew we wouldn’t settle until we were all reunited. It took seven months to plan their journey and we’ve counted down every day. We’re so proud of how they took the journey all in their stride. They are such special little babies. I was tearful and anxious for them to embark on such a long journey but we were grateful that they had each other as they are a close little unit and travel well as long as they can hear and smell one another. Their cat hotel in South Africa started to put rescue drops in their water 10 days before they left.

When their travel boxes arrived, their carriers were setup in the biggest indoor villa and the doors were left open with treats hidden among the shredded paper so that they can get used to them and not be scared. I believe that they were well prepared for their journey and they knew that they were coming to us for forever. Very soon they would be on Aussie soil and even though we wouldn’t get to see them immediately they will be close and breathing the same air as us!

We followed them on their journey from Johannesburg airport to Dubai to Melbourne but we could only really relax once they were out of quarantine and back with us. Our little ginger boy, Baby, was so excited to see us, he talked non-stop. It’s just how we remembered him, when something exciting is happening like wet food or catnip, then he chats loudly like he can’t contain himself with excitement.  Angel, our little girl, came for cuddles immediately, she loves her cuddles.  Pumpkin is the most sensitive of the bunch and he arrived a little stressed and cautious but he soon mellowed out and climbed into his usual spot on our bed.

So after their long ordeal, nothing had really changed. They all kept their little quirks and the things we remember them fondly doing they still do but just at a different home. I think the ones who changed the most was actually us as now we are relaxed and feel more like a family again. They’ve allowed us to really see Australia as our “forever home”.

From the Lort Report  – http://www.lortsmith.com/