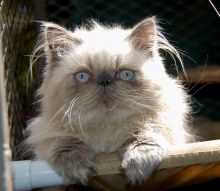 Our featured cat for this post is George, who is a blue point Persian. Blue describes a shade of gray or a dark slate colour. This explains how a Russian Blue or a British Blue (see our post on Sylvester) get their names, despite being entirely grey. There is no such thing as a grey cat, and cat lovers attribute this to the fact that blue is the colour of nobility (at least in the early days), although there is no doubt a sound genetic rationale.

George is a beautiful kitty with a loving personality, and we loved spending time with him in his villa. He has the makings of a male model, always ready for a few photographs. Here he is, lying on one of the fold out cat perches that we have installed around the Hotel. Persian are popular because of their quiet and sweet nature. They are affectionate, but discriminating (aren’t all cats!). They reserve their attention for family members and those few guests whom they feel they can trust. Persians are an ornament for any home, although this does come at a price, and we are not referring to the price tag of a pedigreed cat (which can be substantial). We refer here to the need for daily grooming. That long, beautiful coat doesn’t stay clean and tangle-free on its own. Excessive tearing can also be a problem for Persians, and the corners of their eyes must be wiped frequently to prevent eye stains from forming. On top of this, Persians are also prone to a number of health issues because of their facial structure, most prominent of which is breathing difficulty caused by constricted nostrils, eye conditions and dental maloclusions, meaning the teeth don’t mesh well together. Regular brushing of their teeth is also recommended.

Although we have already featured a persian in a previous post, many international cat associations continue to view Himalayans as a separate breed (see our post on Franzie, a Himalayan). Himalayans are actually a colour variation of a Persian, and are a man-made breed, developed by crossing Persians with Siamese cats in the early 1900s. This was done to pass the colour points and the blue eyes of Siamese cats to Persians (point colouration refers to animal coat colouration with a pale body and relatively darker extremities i.e. the face, ears, feet, tail). Himalayan is actually the American term for colour point.

So if Himalayans are man made, how did Persians originate? This is a very interesting story. We had always wondered how these cats came to have their characteristic flat faces, which seem unnatural. The truth is, present day Persians are also man-made. Through selective breeding, cat fanciers began to mold the Persian to its present-day appearance. They bred cats to have a round head, short face, snub nose, chubby cheeks, small, rounded ears, big eyes, and a sturdy body. Their appearance changed from a fairly normal but rounded face, to one in which the face is described as flat (eveything in line from top to bottom).

The traditional Persian has a fairly normal and rounded face. The middle photo below is a picture of a traditional doll-faced Persian. The Persian is an old breed. To those who love this elegant cat, it will come as no surprise that the long haired beauty originated in the cradle of civilization, Mesopotamia, which was later known as Persia and is now modern-day Iran. Bizarrely, cat shows only recognise the flat faced Persian.

We don’t recall ever having had a traditional Persian to stay at the Cat Hotel, but we will keep a look out and will definitely feature this cat in our blog. Stay tuned!