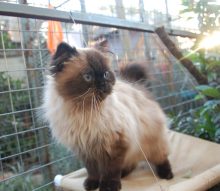 Franzie, a seal point Himalayan female, stayed with us for almost a month and we grew very fond of her. Typical of the breed, although many don’t consider Himalayan’s to be a separate breed (but rather a Persian), they are affectionate, calm and cuddly. They are beautiful cats, and Franzie had no problem posing for the camera, although she is due for another brushing after a day and night of rummaging around her garden villa.

According to iHeartCats.com, the Himalayan is the most popular cat in the world, although many think of them as just a variety of Persian–which is apparently the world’s most popular breed. Its popularity stems from its striking appearance and obvious beauty, but also because they are calm cats that love to cuddle . They also prefer relatively quiet and low key surroundings, much like the Cat Hotel!

Himalayan’s, known for their sparkling blue eyes and unique markings on their luxurious coats, are not naturally occurring. This kitty came as a result of human intervention. Breeders desired a cat with the coat of a Persian, but with the blue eyes and markings of a Siamese, and the Himalayan was born. Therefore, while some think of the Himalayan as a distinct breed, others consider it to be a variety of a Persian. They were named “Himalayan’s” because of their colour, which is a reference to the coloration of Himalayan animals, in particular the Himalayan rabbit (according to Wikipedia). This rabbit doesn’t look anything like Franzie though, so there are quite a few colour variations.

While these cats are super adorable, they are prone to health issues for a number of reasons. Because of their flat face shape, they are prone to breathing issues and require daily wiping on their faces to keep them clean and healthy. Also, there must be close attention paid towards their grooming rituals, as well as keeping a watchful eye of litter becoming stuck in their furry foot pads. Franzie is due for her grooming, which is done regularly for the long hair breeds whilst at the Cat Hotel. If you want a beautiful lap cat that is just as cuddly as they are cute, then look no further than a Himalayan, although their daily upkeep should be kept in mind.

Although we will miss Franzie when she goes home, we have many other guests to keep us busy, and the next kitty on this feature is a regular, who usually visits us when the Protea’s are playing.