Doosra – The gentle giant who is more than a cricket delivery 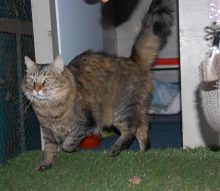 In 2014, we were disappointed to hear that a couple, who were regular clients of the Cat Hotel, were leaving Johannesburg to settle in Cape Town. As cricket writers, they could really live anywhere in South Africa. Of course, following and reporting on the Protea’s required regular travel both locally and abroad. During these times, Doosra stayed with us, which was often for a month or two – the time that it takes to fit in 2 to 3 test matches, a one day series and a few 20 overs matches.

Happily, they decided to continue to use the Cat Hotel, which meant flying Doosra up from Cape Town to OR Tambo, where we would collect him. For his latest visit, he has been with us for over a month, and we will be dropping him at OR Tambo in a few days. Its always a pleasure to introduce Doosra when people view the Cat Hotel. Its an interesting name, and if you are at all familiar with cricket, you will know that a doosra is a particular type of delivery bowled by an off-spin bowler.

So Doosra is unique in many ways. He is the only cat that regularly stays with us, who lives in another city, and is also our only guest that is named after a cricket delivery. He is also a character and has made many friends at the Cat Hotel. Since he usually stays for awhile, he gets to wonder around the passages. Doosra is certainly a Maine Coon mix, although he is smaller. Maine Coons are known as the “gentle giants” of cats, thanks to their sizeable bodies and sociable natures, and this definitely fits in with his character. Doosra introducing himself to one of our female guests

As their name suggests, Maine Coon cats are native to Maine on the East coast of the USA. Thanks to their brown coats and bushy tails, one popular (but scientifically unsound) explanation for the breed’s origin is that it resulted from semi-wild domesticated cats mating with raccoons! (now that we think about it, his girlfriend does look a bit like a raccoon 🙂 ) Another theory is that Maine Coons are descendants of six pet cats that Queen Marie Antoinette shipped to Wiscasset, Maine, as she was planning her escape from France during the French Revolution. A more plausible story is that the furry kitties originated from short-haired domestic cats breeding with long haired cats, which may have been brought to America by the Vikings or European sailors during the 1700s. Since genetic testing indicates that Maine Coons are actually a descendent of both the Norwegian Forest Cat and a mysterious extinct domestic breed, the Vikings are likely responsible.

Some believe that Maine Coons are the biggest cat breed, but they actually fall somewhere between Norwegian Forest Cats, which weigh up to 16 pounds, and Ragdolls, which can weigh up to 20 pounds. We have had many Ragdolls stay with us, but none that big, and this will have to be the subject of another post. We have our own resident Maine Coon at the Cat Hotel, called Bazzy. We adopted him from a family that moved offshore, and you will find him lazing on top of the runs, or lying in the sun near the entrance.